The first draft of this blog entry was too long. This draft is streamlined for people who just want the big picture, but with endnotes for those who really want to delve. Sharing and supporting others is an important part of this.

Before introducing the new relationships “The Catalyst” has forged with FilmFundingLA and Moving Pictures Media Group, please allow me to wrap up the festival part of this journey.

While it was wonderful, unbelievable and humbling, submitting to festivals is time consuming and costly. Before we stopped applying, “The Catalyst” short won the following eight awards: 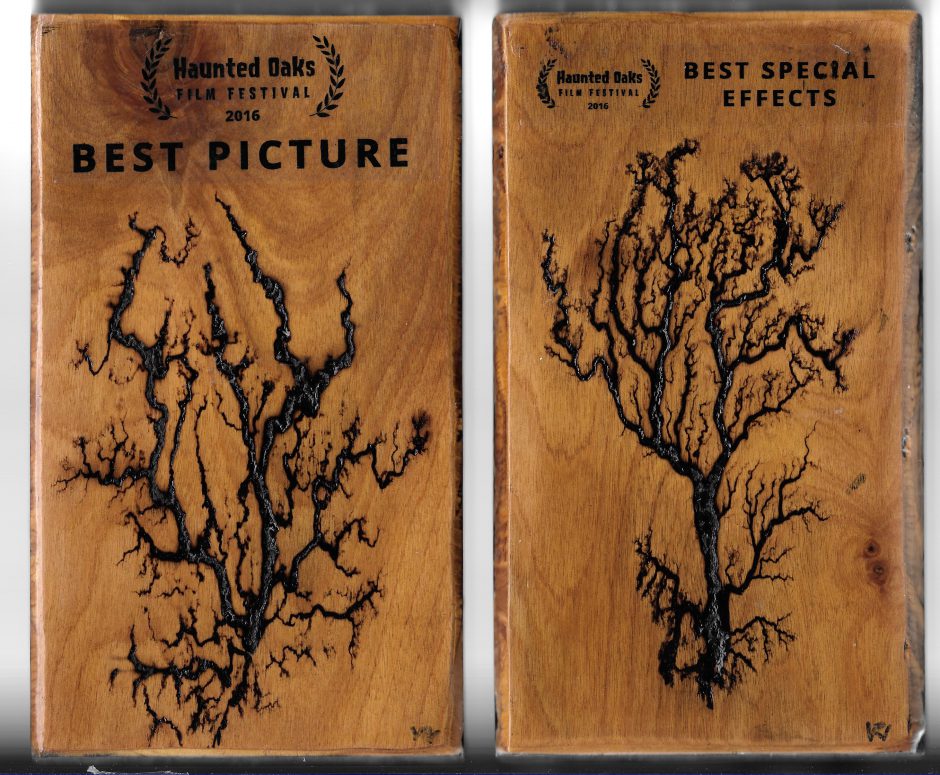 Although winning is great for the ego, the goal was always to attract attention for funding the feature film, not to bask in praise.

To recap our progress up until this point, after pulling pages from “The Catalyst” feature script, raising money to shoot an award-winning proof-of-concept short, putting together a family of 76 people to make that short, and taking it to festivals, I felt like I’d climbed an immense mountain. From this high vantage point, I tried not to be disillusioned when I saw larger mountains still ahead. So grab a harness and ropes, and let’s move on…

A film is made in five stages. Development is everything you do to get funded. This is where “The Catalyst” is now. Pre-production is what you do after funding; it is readying a film for production, planning in such detail one hopes to prevent overages so a profit can be achieved. Production is the actual shooting of the film. Post-production readies the film for the world, and Marketing and Distribution gets it out there, the final mountain to climb, and then we head off to the next mountain chain (another film project). 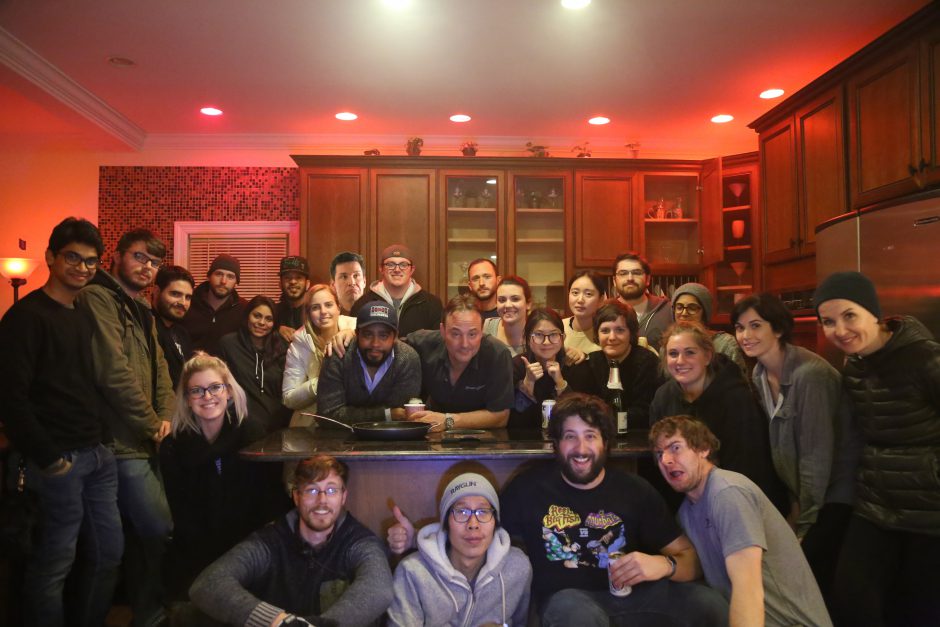 I love the team that made the short with me and will use as many of them as I can on the feature film. As great as they all are, when it comes to funding, I felt I should team up with people who seek funding full time. If I couldn’t find the right partner, to interest backers I would have to fumble to get a package together myself. Minimally, I would need a business plan and a film budget to go with the script and the short film. Unable to afford professional assistance, I was going to fudge both. I have since learned doing that is the single biggest reason so many films never get out of the development phase.[i] In the film business, the development stage is a mystery to most beginning writer/director/producers, so I am extremely happy to have met the newest members of “The Catalyst” family…

A finance facilitator, Michael Praver of FilmFundingLA.com contacted me through LinkedIn about raising working capital for my production company, Monkey Brains. (This working capital should not to be confused with the larger sum needed to finance an entire feature film.) Having development money to – for example – pay someone to write a business plan or detailed budget would be great, but with no experience, who would I even hire? Michael asked if I wanted to be introduced to Ray Ellingsen of Moving Pictures Media Group, a production company with its own slate of films, but that also consults, assisting producers to secure funding and get their stuck projects moving again.

I knew of Ray Ellingsen. Whenever I had a long car ride, I would listen to lectures and podcasts on movie production, and Ray Ellingsen’s name and voice kept popping up. I had been impressed with what Ray had to say in those recordings. Since the first call with Ray was free, I figured, why not?

Michael connected Ray and me. We chatted. I unloaded all I had accomplished so far on “The Catalyst.” Ray offered to read the script, see the short, and for no obligation, prepare a development budget so I would know what it would cost to better assure investors would want to fund my film. I said okay.

Within a day or two, Ray got back to me. “I don’t want to be presumptuous,” he said, but would I consider allowing his company, Moving Pictures Media Group, to co-produce “The Catalyst” with me? I was dumbfounded and had to ask what that even meant. It meant his company was prepared to wave any consulting fees, would shepherd me through the development process, recommending their own top venders (for budgets and business plans, etc.) and lead me through the cookie-cutter procedure they used for funding their own films. Then once funded, they did not require ownership of my intellectual property, but only the standard producer’s fees and backend percentages; I would retain all my rights. Well, for someone planning two sequels, this was great to hear.[ii]

To be sure I wasn’t falling for a scam, I showed all the agreements to the wonderful law firms appointed to me by Volunteer Lawyers for the Arts.[iii]  These fine people clarified and verified what I was hearing from both Ray Ellingsen and Michael Praver, and for that I am very grateful. What I learned from all of them about the flow of money can be seen in the following endnote. Short film investors, please note the part in bold type.[iv]

If you take the time to read that endnote, you’ll see I’m not planning to make just one movie and see what happens. I’m starting a serious business. And like any business, it must have the proper infrastructure or it will fail. I think I have that now.

So we are about to start the Development phase in earnest. I will write again when we are funded and are about to begin the Pre-Production phase.

As I always say, I can’t thank everyone enough, and I won’t stop trying.
Thank you, everyone.

[i] A film needs a professional business plan, one that has sections and detailed content on the exact pages investors expect. (Just as successful grant writers are in high demand, so are those who write bankable film business plans which secure funding.) And my fudged budget was going to be just a “top sheet” or a page of only the largest budget categories. But investors want a far more detailed budget, accurate down to the smallest expenditures so it can be bonded and insured, with a “Day out of Days” report showing the daily “burn” rate at which money will be consumed. I couldn’t fudge these things, nor could I get them for free.

In business, these development items and others would be called “feasibility studies.” They help investors trust that a potential business owner has done everything he or she can to mitigate the risk of starting that business. Then and only then will the elusive funding be granted.

[ii] When I previously sold scripts, I gave away my intellectual property rights for the considerable fee received. Although I had not hit a payday yet on “The Catalyst,” for me now, the Moving Pictures Media Group deal is a great one.

[iii] Big thank yous go to Paresh Trivedi and Nicholas Pellegrino at Proskauerfor – among other things – going over the development and production agreements between Moving Pictures Media Group and my company Monkey Brains LLC. Also big thank yous to Rachael Moss, Michael Canencia, Evan Cappelli and Kevin Park of Paul, Weiss, Rifkind, Wharton & Garrison LLP for – among other things – going over the Monkey Brains LLC financing agreements with Michael Praver’s Processing Team and for creating Catalyst 1 Movie LLC. More on that in the following endnote…

[iv] A film is essentially a business. Money gets put into the business, and hopefully money comes back and a profit is made for all involved. Ever notice listed at the end of a movie an interesting business entity with “LLC” at the end of its name? Thanks to my lawyers at Park of Paul, Weiss, Rifkind, Wharton & Garrison LLP, I was able to form “Catalyst 1 Movie LLC” to be the business entity that will make “The Catalyst.” That entity will exist as long as money flows for that project. When I make the sequel, I will form “Catalyst 2 Movie LLC” and so on…

My production company, Monkey Brains LLC, is the business entity that will coordinate it all. The way it will work is, I raise capital for Monkey Brains LLC. Monkey Brains LLC makes an inter-company loan to Catalyst 1 Movie LLC. Under the guidance of Ray Ellingsen and Moving Pictures Media Group, Catalyst 1 Movie LLC spends the money to develop “The Catalyst” so its total package becomes irresistible to investors. (Catalyst 1 Movie LLC will purchase script coverage, risk analysis, an executive summary, financial projections, market studies, audience mapping, film history comparisons and trends to name but a few. Catalyst 1 Movie LLC will also hire a producer’s representative to assist with a detailed release plan for world-wide distribution, as well as a web designer and graphic arts team, a digital marketing advisor to build an audience, and an analytics firm to create a detailed market study and projections.)

This development package will be very compelling. When investors decide to fund “The Catalyst,” the money will be given to Catalyst 1 Movie LLC to make the movie. But first, Catalyst 1 Movie LLC pays Monkey Brains LLC back for all its development costs, INCLUDING the cost of “The Catalyst” short. (So for my short film investors, funding isn’t just about me finally making the movie. It is also about paying you all back!  My pledge has always been: If you risk money with me and my films, I will always do everything I can to ensure we all make MONEY.)

With invested money in the bank, Catalyst 1 Movie LLC goes on to make “The Catalyst,” while Monkey Brains LLC is debt free and able to develop my other scripts. (I have four feature scripts ready to go, plus there is a rough draft to polish of the first of two Catalyst sequels.) I used to work for DreamWorks and Paramount Pictures, but now I work for Monkey Brains LLC, which hires me out as a writer/director/producer, will pay me a salary and cover my expenses and insurance. This is real scary grown up stuff, but I am ready.

(If you read all the endnotes, you are a true supporter and fan and should receive credit for the effort. Please respond to this post so we know who you are and can thank you either here or privately.)

Thank you, everyone.
a