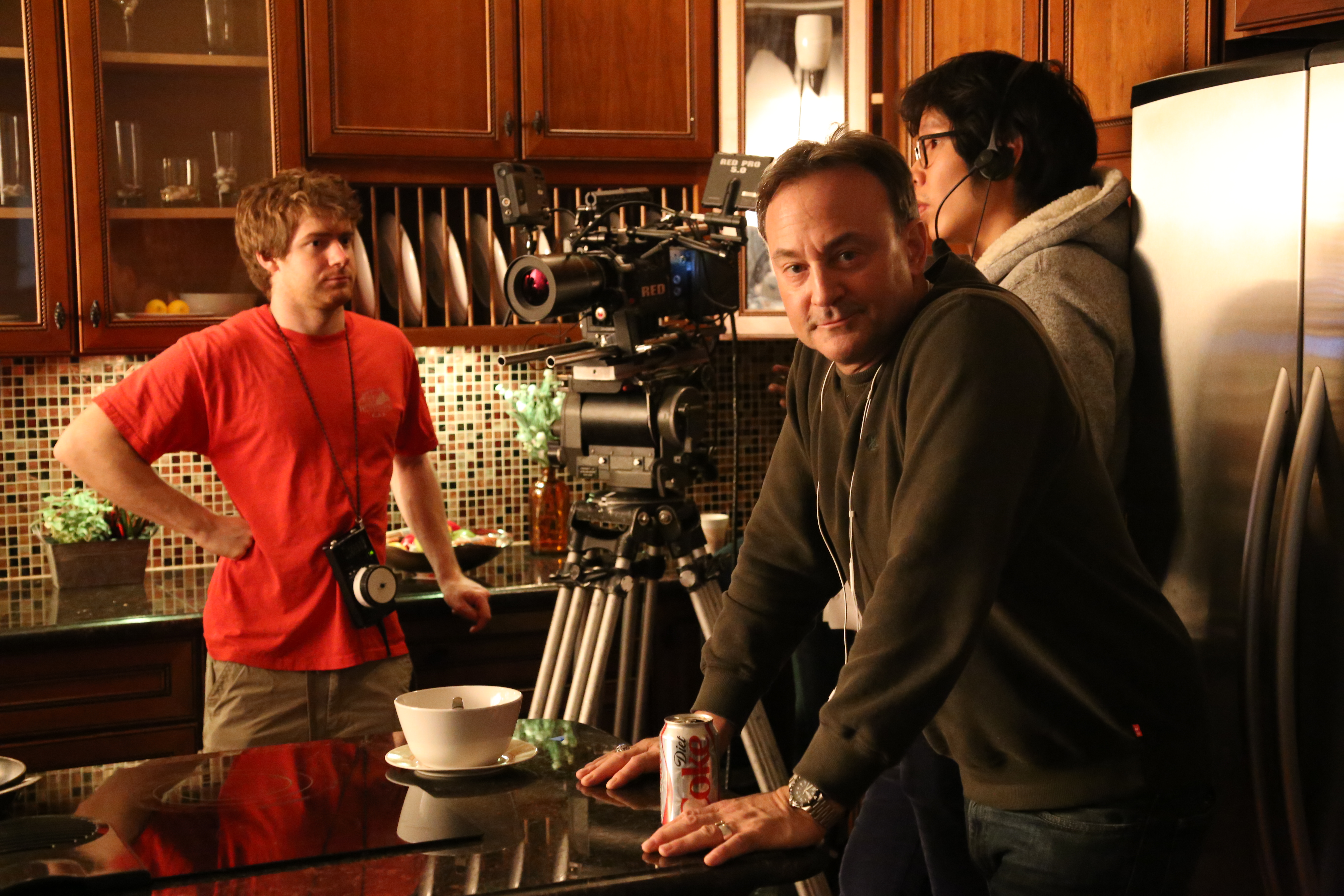 I first started outlining “The Catalyst” feature script in the spring of 2009. The first draft was completed and registered with the Writers Guild of America on 9/18/09.

So what happened? What took so long?

I knew I could sell “The Catalyst.” That wasn’t the problem. It was a commercial script, written in a commercial genre, with an eye on budget (not many actors, one location) and with a strong hook: accidents trigger hauntings. Selling scripts had never been my problem. Getting a “green light” had been the problem.

I knew if I allowed the script to be sold, I would be flung aside as “just the writer” and then probably be rewritten. Sure “The Catalyst” might have been produced, but then another director would be showcased with the visual gimmick I devised: the ghost antagonist would be the camera –through the ghost’s eyes we would see it be “born,” learn to be a poltergeist and eventually how to possess a person. As much as I wanted to sell another script, I didn’t want to give away my chance to direct something new and original.

I put it in a drawer for what turned out to be four years while I worked at Paramount Pictures in another of my great non-creative “waiter jobs.”. (A “waiter job” is a job artists take while holding onto their dreams, and I had many terrific ones through the years; please see “Quitting My “Waiter Job.”) I fantasized after writing that script, I would run into a producer, a parental figure, who — when shown the writing — would recognize my worth, and would have the clout to support me as its director. Of course, this was about as likely to happen as manned voyages to Mars. But if you wait long enough… 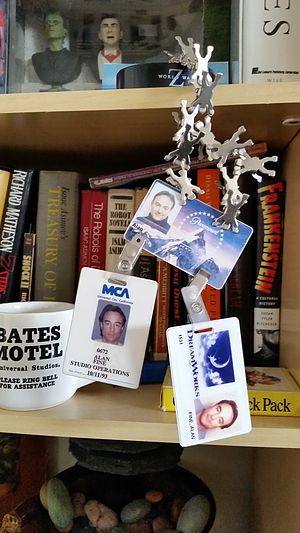 For two years starting in 2013, I met a string of producers. Discussions with them put it in my head to “just do it.” Either make a crappy little feature for under $100,000 (but who would even trust me to do that yet?) or for a lot less money, shoot a pivotal scene as a proof-of-concept (translation: proof I could even do it) and use the short film to raise money for the feature. This is where many of you out there stepped in with financial support, and as they say in Academy Award acceptance speeches, I wouldn’t be here without you.

So, to put it all in perspective, words from a scene I wrote in 2009 were finally just last month performed by wonderful actors on a live set and captured with a big-ass camera and microphones on poles. For that, I want to thank John Rosario, our Director of Photography again, and some people I haven’t yet thanked… his team, Phil Russell, Tom Capobianco, Jon Carr, Peter DeJesus and Sashank Sana; Richard Baldomero and Gabe Quiroga for sound; Production Designer Sophy Hou and Prop Master Kendra Eaves for making the set look so beautiful; and award-winning artist Terrence Fine for her support and the use of her artwork in the shoot. (www.terrencefine.com) 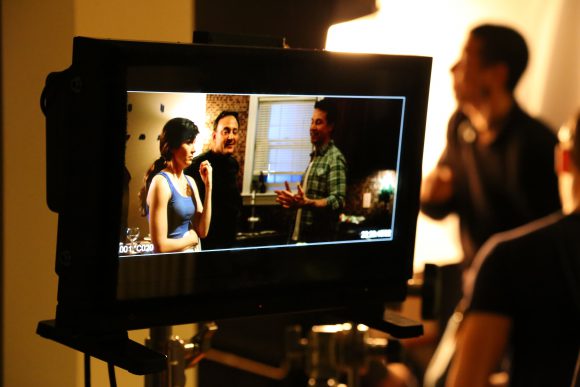 In the monitor are Sarah Wilson, Alan Fine and Kristoffer Cusick

One-take Wonders, Kristoffer Cusick and Sarah Wilson discussing with Alan Fine how to vomit up a ghost.

Now we come to post-production…  (WAIT! If you are just joining us, you might want to read casting, pre-production and production blogs first.)

My big fear was whether my computer and editing software could work with the extremely huge files captured at 6K by the stunning Red Dragon camera and the luscious Panavision lenses. Not wanting to kid around, I downloaded the very latest Adobe Premiere Pro CC, which to my delight not only could handle the files, but had settings prepared to accept them. This was no big deal. My work flow was the same here as it had been when I directed and edited in standard definition (SD) the six installments of the documentary series “Classroom Encounters.” Actually, it was even the same as shooting something silly with my phone. In all cases, I could just drag the files into my computer and start working. That’s was it! (Well, one difference now was the sound and picture were in two separate files and I had to synchronize them using the clapperboard.) 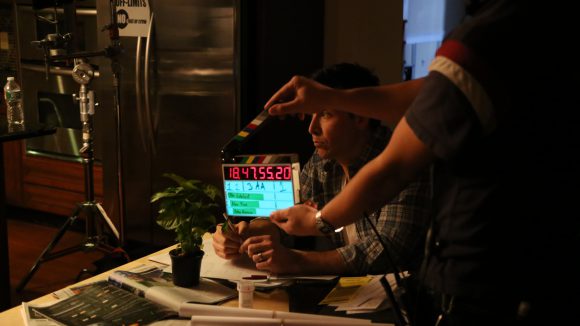 A clapperboard identifies the shot and the noise it makes is a clean edit point used to synchronize picture and sound.

The Red Dragon goes beyond capturing movies at SD which was VHS, but also HD which is your TV set now, and also 2K, 4K and 6K. Think IMAX screen size. So like a wild horse, I’m holding the picture back, shrinking it to 31.5% of its original size so it will even fit on a normal movie screen or a TV.

Here’s the part about it I love the best… Every so often, I would wish we had a closeup we didn’t plan. Guess what? I could just change the percentage to 50, 75 or 100%, cut everything outside the frame and I would already have that closeup! It is called “punching in” and it is a wonderful trick I intend to use for the feature film if Panavision will be so kind again and we can afford the same camera.

I have been editing for a couple weeks now. The film was initially 6.5 minutes, but is now about 5.5 minutes. It is creepy, fun, and very close to what I envisioned, except for the missing special effects. I’m striving to “lock the picture” as soon as possible, because you don’t want to waste time and money creating sound and special effects for shots that might be cut. But before we can do those things, we need to “color correct.” (Color correction gives a film its uniformity, so some shots aren’t darker or brighter than others.) And lastly, we need a music score. I’ve composed a stand-alone piece used for the Catalyst Ghost Story Archives (click here to hear it), but it won’t work for the short. That will need something much creepier! 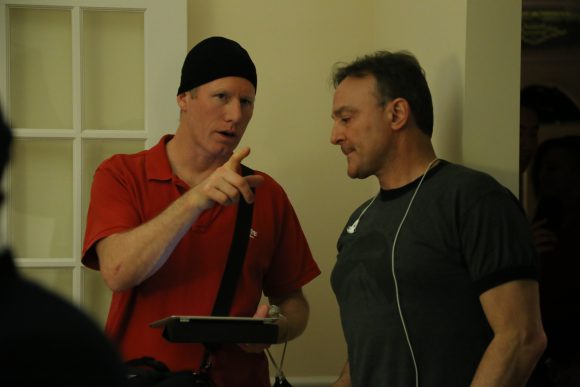 So many steps, I ask myself, how long will this take, not just for the short, but the feature film as well?

It is like mountain climbing. You can’t look down. You just concentrate on the three feet around you. I did that in 2009 when I wrote the outline. I’m doing it now as I edit the short. I will do it when we try to raise money for the feature film.  I will do it hopefully for the two sequels we’re planning. Three feet. That’s all you can handle at a time.

That said, I’m hoping the short will be ready to show investors by spring. I’d love to raise a million by Fall and be shooting a year from now. (I can’t even believe I typed that sentence.) A year from now would be winter though. I’d rather shoot in autumn for the colors of the leaves, but that might be too rushed. I WILL NOT wait until the Fall of 2017, so it will have to be winter. I mean, I’m patient, but there are limits.)